CHRIS ERICKSON STATE OF THE ECONOMY 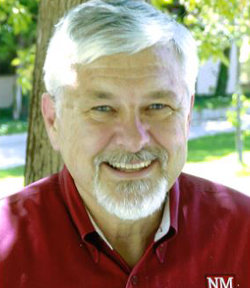 The pandemic has laid bare the importance of broadband as never before. From remote work to online schooling, broadband has been the crucial link that has allowed the economy to function in the face Covid. And a lack of connectivity is a major barrier to economic development in New Mexico.

Broadband coverage in our state is abysmal. Broadband Now ranks New Mexico as 48th among the 50 states for broadband coverage while getinternet.com ranked us 43rd. These rankings are important. The move to remote work has enabled office workers previously tethered to their desks to relocate outside of metropolitan areas. Meanwhile, the pandemic has made urban living less inviting.

Remote workers decamping for rural life need places with good Internet connectivity and that isn’t New Mexico. We have missed out on this potential growth opportunity. To avoid missing out on the next opportunity when it arises, we need to fix Internet in our state now.

While there is a robust fiber backbone throughout the state, what is lacking is the “last mile” connectivity to individual homes and businesses, and the expensive electronics that drive content are located mostly in Albuquerque.

Broadband is a capital-intensive technology requiring high upfront investments. Laying fiber optic cable is expensive and routinely costs tens of thousands of dollars per mile. To justify this expenditure requires a reasonable expectation that demand will be sufficient to generate adequate revenue. In sparsely populated New Mexico, this is a problem. There is enough demand in Albuquerque but much of the rest of the state is underserved.

One bright spot in New Mexico’s dismal Internet landscape is school connectivity. In recent years, we have spent about $300 million to connect schools to the Internet. Currently, all schools in New Mexico are on the Internet, which served us well during the pandemic shutdown. Still, there are problems as there is a critical shortage of qualified technicians to managing education Internet. The reason for this problem, of course, is low salaries.

During the 2021 session, the Legislature created a $100 million new matching fund program to finance broadband. Meanwhile, the bi-partisan federal infrastructure bill, passed by the Senate and awaiting House action, provides an additional $100 million for New Mexico.

These funds will help a lot. The state Department of Information Technology estimates that it will take another $330 million to provide the adequate connectivity to underserved communities. But this is a moving target. In fact, connectivity has increased by more than 25 percent in the last five years, yet New Mexico continues to lag. We must run fast just to keep up.

Christopher A. Erickson, Ph.D. is a professor of economics at NMSU. He recently attended a economic development summit sponsored by NMSU Chancellor Arvizu at which the need for better broadband was identified as major impediment for economic development in New Mexico. The opinions expressed may not be shared by the regents and administration of NMSU. Chris can be reached at chrerick@nmsu.edu.