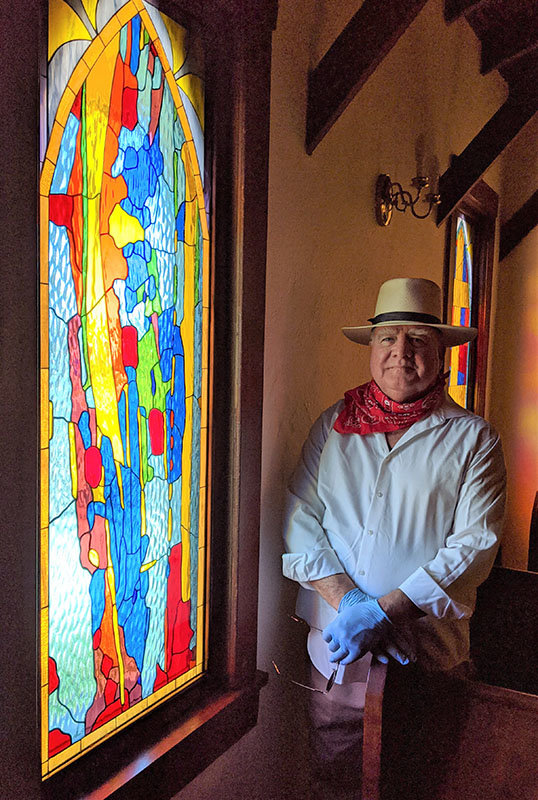 Las Cruces artist Frank Peacock at St. Andrew’s Episcopal Church’s Kendrick Chapel during the installation of the eight stained-glass windows he made for the chapel.
Photos by Jane Peacock 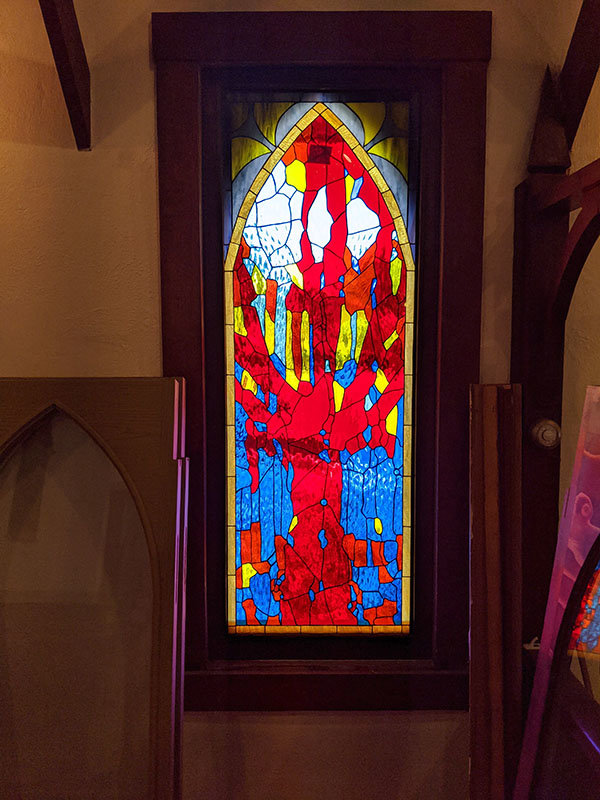 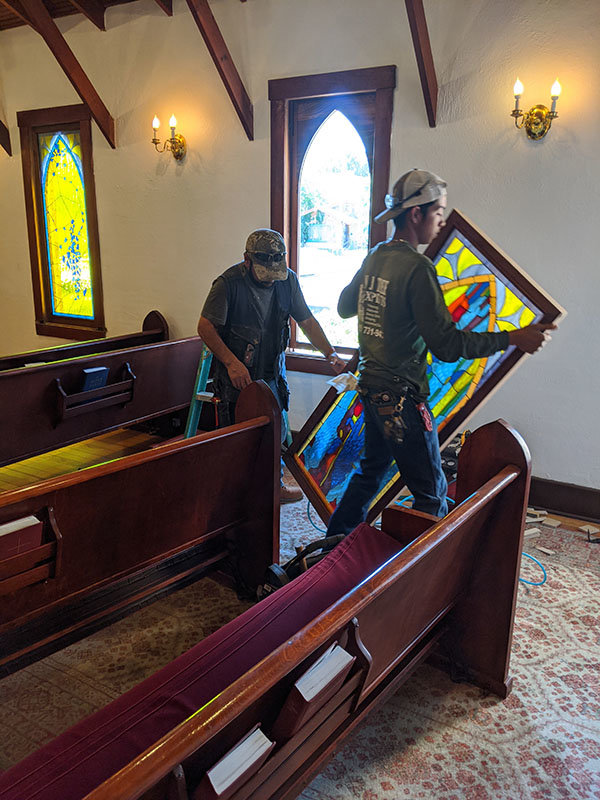 Workers helped to install one of eight stainedglass windows at St. Andrew’s Episcopal Church chapel. The project was completed in mid-August.
Photos by Jane Peacock 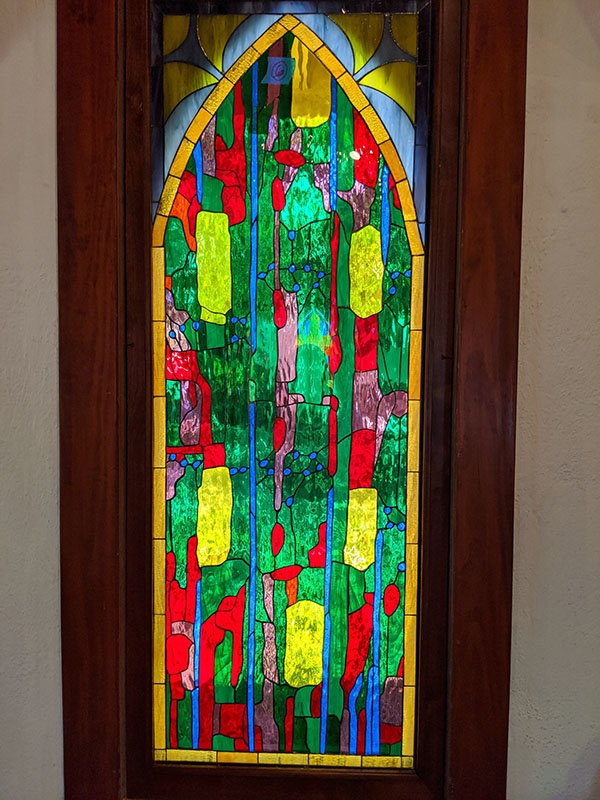 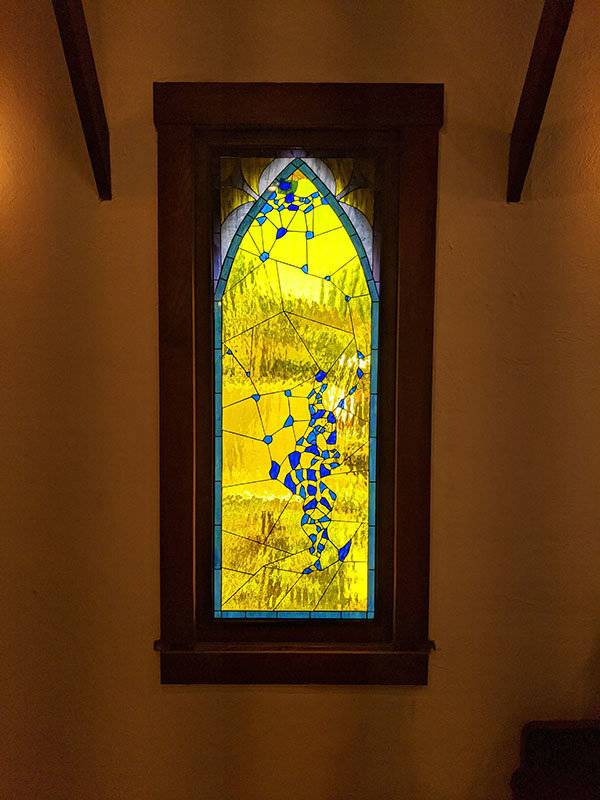 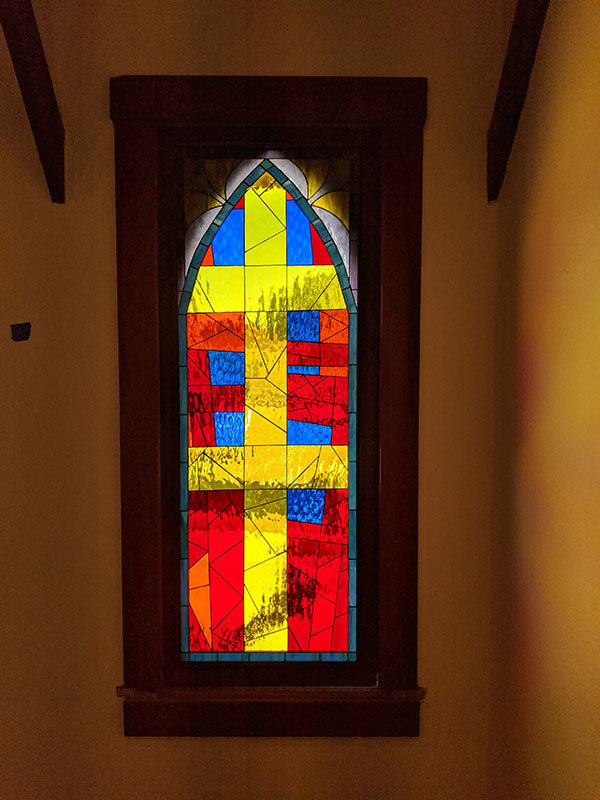 Cross of the Ages
Photos by Jane Peacock 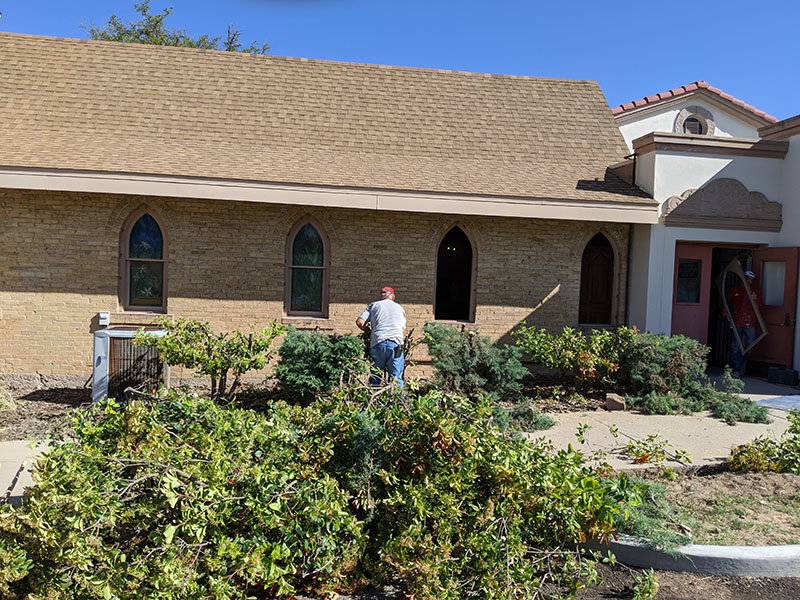 Shrubs were cut down to allow window installations on the south side of Kendrick Chapel.
Photos by Jane Peacock
Previous Next
Posted Wednesday, September 1, 2021 3:01 pm
By Mike Cook

With eight windows that include almost 2,000 individual pieces of stained glass in the most brilliant reds, blues, greens and yellows imaginable, Las Cruces artist Frank Peacock has transformed St. Andrew’s Episcopal Church’s Kendrick Chapel into “a unique spiritual space” that floods the visitor with “hope, inspiration and love,” in Peacock’s own words.

The church hierarchy approved the project in July 2019, installation began about 14 months ago and Peacock completed the work in mid-August.

The project actually began 21 years ago when Peacock “embarked on a journey of prayer, faith and spirit-driven production of drawings and paintings” that he hoped would one day become stained-glass windows in a place of worship. A member of the St. Andrew’s congregation, his vision fit with then St. Andrew’s Rector Scott Ruthven’s plans to redo Kendrick Chapel’s original windows, which were installed in 1914, Peacock said.

Peacock began by making drawings of the windows and then scale models, visiting cathedrals, churches and chapels across Europe and studying the art and science of stained glass. A popular and respected regional artist who has worked extensively in acrylic for more than 50 years, crosses have often shown up in the trees, plants and other abstract and realistic forms in nature depicted in Peacock’s paintings and pastels.

The chapel project was a whole new venture for Peacock.

“I had never done an architectural job for a building,” he said, “much less a church.”

Peacock is also an expert framer, and that helps explain his attention not only to the transparent stained-glass, but also to the translucent milk stained-glass border and the original decorative wood framing that was preserved for each window.

Peacock was involved with every step of the project, he said, from cutting down junipers and other bushes outside the windows to working with carpenters and a contractor to measure the window frames and install the new stained-glass windows and the impact-resistant clear glass sheets on either side.

That came after he worked through “three levels of acceptance” of St. Andrews’ leadership and its congregation to get the project approved in the first place.

At first, some may have had their doubts, but once they saw it unfolding, “the congregation has been very excited about the project,” he said.

Peacock visited the company in Chula Vista, California that manufactured the windows, which were fabricated in Tijuana, Mexico, he said. He found the manufacturer, StainedGlassWindows.com, on the internet.

“It was a thrill for them and their craftspersons to have an artist in the factory,” Peacock said, “as they had never worked directly with an artist before.”

“I’m ecstatic,” Peacock said, describing the project as a “career-capping event. It’s not about me.   “it’s about the windows. This is my gift.”

The entire project cost about $40,000, Peacock said. He charged nothing for his work.

“Everyone is welcome” to visit the chapel, Peacock said. It’s “not just for the use of the congregation or Episcopalians,” he said.

Ruthven has retired after 17 years with St. Andrew’s. Peacock said St. Andrew’s will welcome a new rector Jonathan Hanneman Oct. 1, who is moving to Las Cruces from Redmond, Washington.

Kendrick Chapel was built by the Rev. Nicholas Hunter “Preacher” Lewis, who was born in Powhatan County, Virginia, in 1869 and died in El Paso County, Texas, in 1948. A beloved Episcopal missionary, Preacher Lewis is buried in the Masonic Cemetery located at 706 Compress Road in Las Cruces.

The window names and themes

Each of artist Frank Peacock’s stained-glass windows in St. Andrew’s Episcopal Church’s Kendrick Chapel has a name and a theme. The eight windows were selected by the church congregation from 12 of Peacock’s original drawings.

Before installation, Peacock moved each window into different locations throughout the chapel “to see where the light was best” for each one’s unique color scheme.

“Each one is my favorite for a different reason,” Peacock said.

Starting in the upper right corner of the chapel, and moving clockwise to the chapel’s south side, the windows, with names and descriptions by Peacock, are: