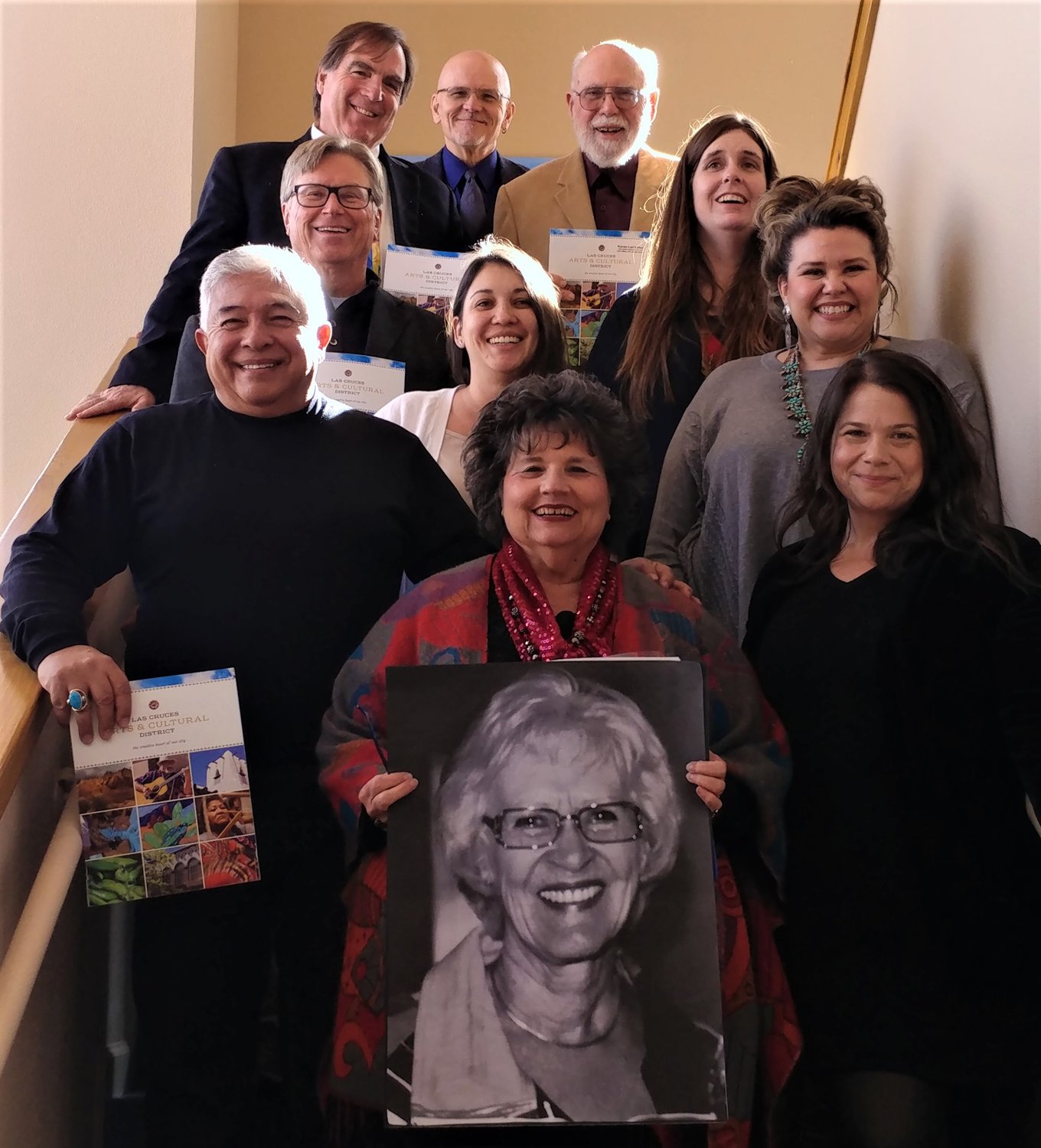 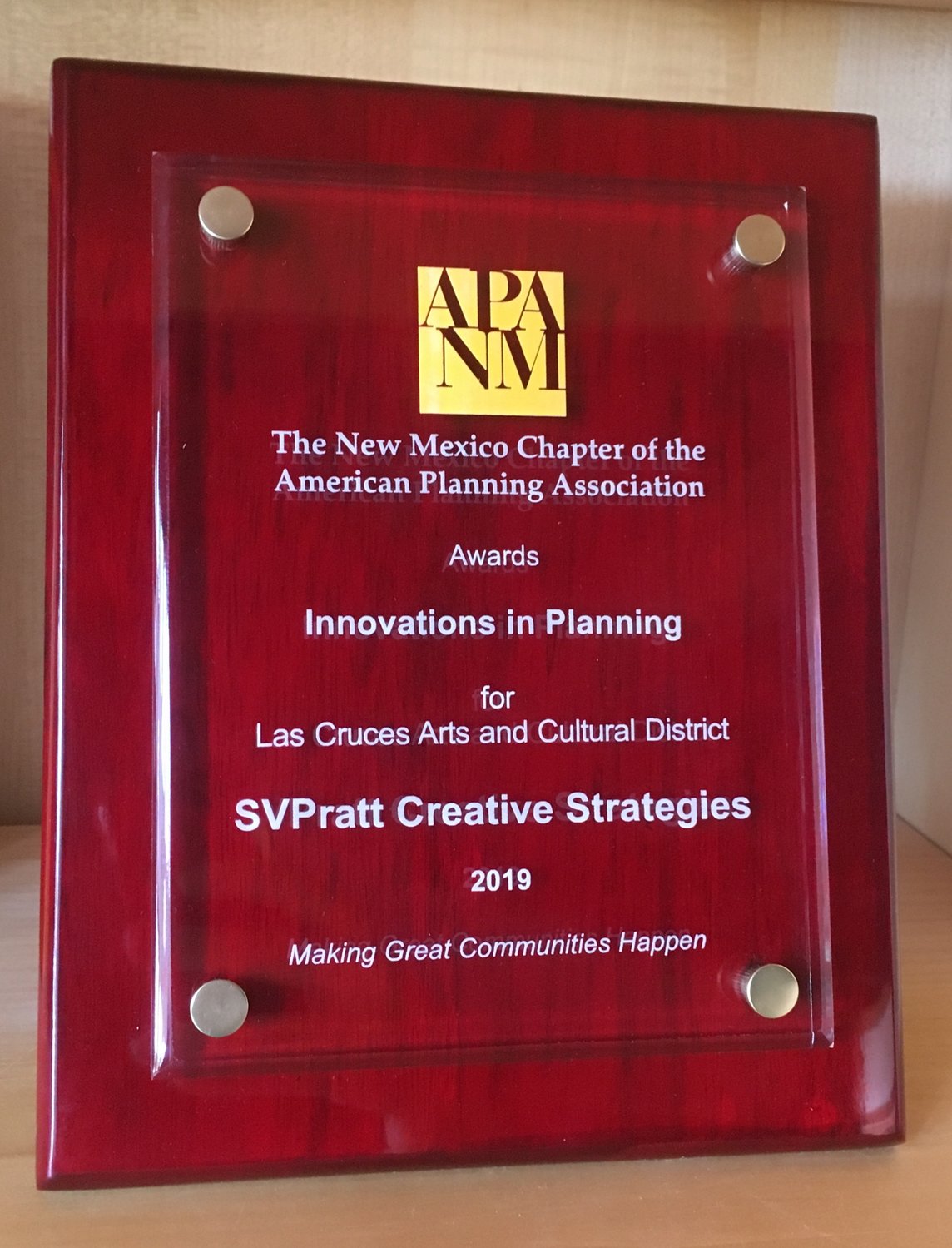 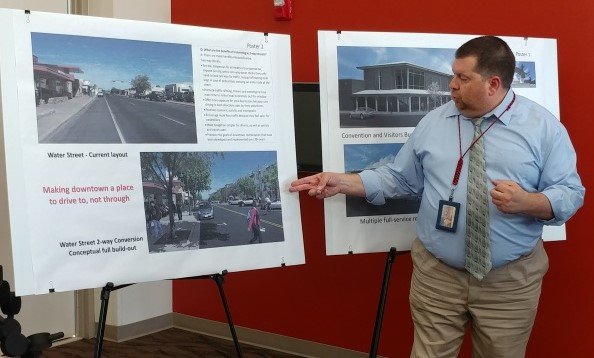 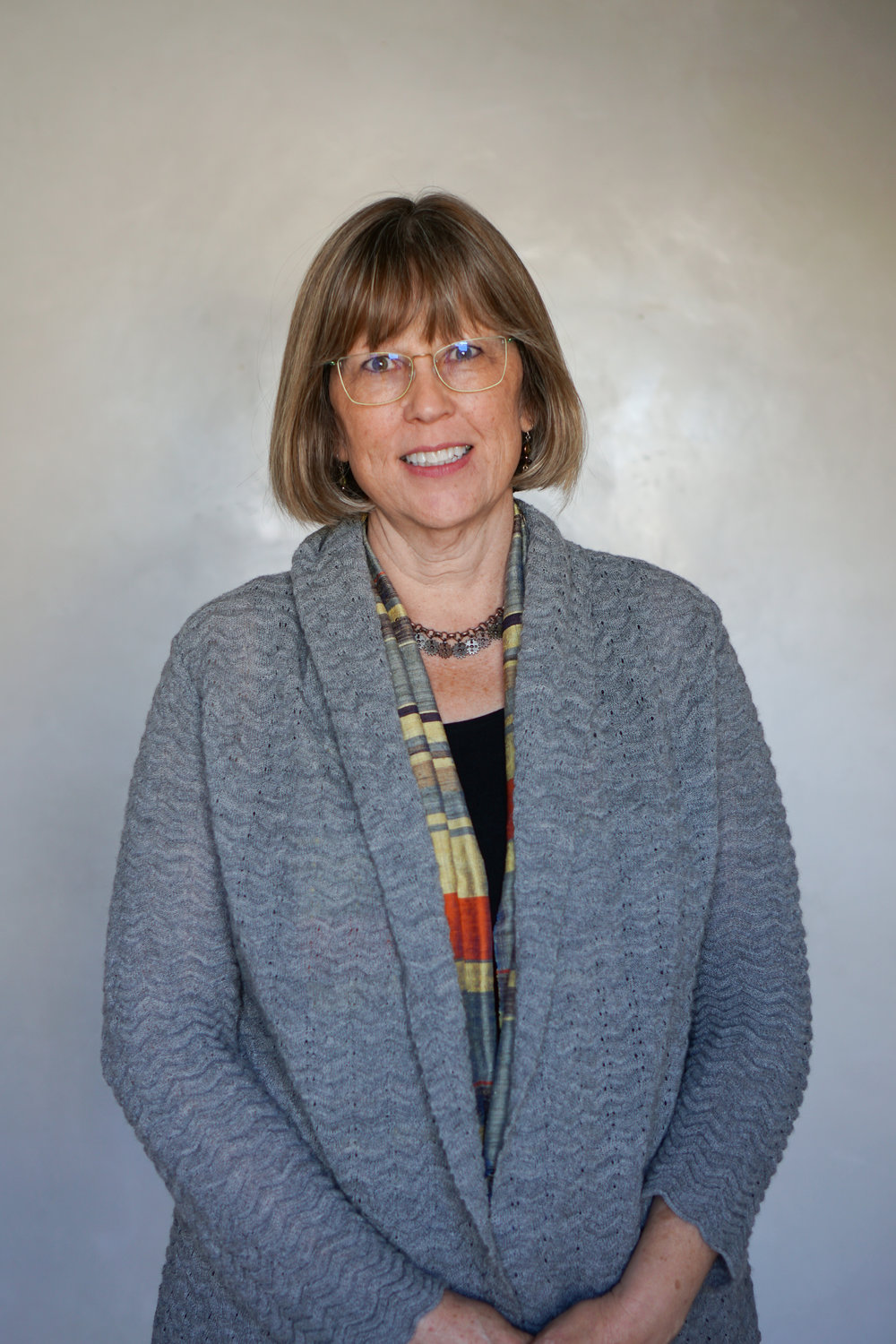 The Las Cruces Arts and Cultural District (LCACD) received the New Mexico Chapter of the American Planning Association’s (APA-NM) award for Innovations in Planning at the chapter’s annual meeting in September in Santa Fe.

“The words the chapter’s awards jury used to describe the planning approach were almost as colorful as the beautifully illustrated document itself – innovative, visionary, impactful, vibrant, and inclusive, among others,” according to an APA-NM news release.

“In reviewing the document, the jury noted the document’s action plan, which centered around four goals designed to maximize LCACD’s role in transforming downtown Las Cruces into a world class destination and economic center without compromising the community’s values. The awards jury truly felt that this plan and action agenda, outlining responsibility and time frame, will help make LCACD

another asset in a state already rich in cultural and artistic traditions. The awards jury was also impressed by the amount of community input that went into the planning process, noting the diversity of backgrounds, thoughts, and ideas that went into plan,” the news release said.

APA-NM is comprised of more than 300 community planners working in a variety of settings in the private, public and nonproﬁt sectors. The Las Cruces Arts District Plan is a legacy project in which

the entire Las Cruces community can be proud.”

The Las Cruces Arts and Cultural District (LCACD) plan, adopted by the Las Cruces City Council in July 2018, recently received an international award from the Creative Tourism Network (CTN), an association based in Barcelona, Spain.

The recipients of the 2019 Creative Tourism Awards were announced in London at the World Travel Market Nov. 6. The awards aim “to reward companies, projects and destinations worldwide that foster the new generation of tourism, characterized by the active participation of the tourists in artistic and creative activities,” according to a news release from SVPratt Creative Strategies, who received the “Best Strategy for Creative Tourism Development” award on behalf of the city, LCACD and the Downtown Las Cruces Partnership (DLCP).

SVPratt, including owner Sabrina Pratt in Santa Fe and Associate Irene Oliver-Lewis in Las Cruces, was the consulting firm that worked with the city to develop the plan.

This is the first time a creative tourism award was given to a project in the United States, according to the news release.

“The creation of the LCACD plan was a community effort that my company was very pleased to be hired to lead,” Pratt said. “Many dedicated and talented residents of the city played a part in creating the Plan. Las Cruces is a leader among cities working to revitalize their historic centers through cultural planning.”

“This is a monumental honor for our community of artists, arts advocates and arts producers,” said Oliver-Lewis, an artist, long-time arts advocate and member of the LCACD. “It underscores, at an international level, what we have in our hometown in regards to arts, culture and historic preservation and its potential for economic development, cultural tourism and workforce development in arts and culture. In reality, the award reflects my 50 years profession in all aspects of the arts. I am honored and it brings joy to my heart. A creative 2020 is ahead for all of us,” she said.

“It was a pleasure and privilege to work with a such a talented and dedicated group of community leaders and artists,” said Andy Hume, former downtown coordinator for the City of Las Cruces, who spearheaded creation of the ACD for the city. “I was pleasantly amazed to hear we won an international award. The experience that Sabrina and Irene brought to the planning process was exactly what we needed to create successful plan. I look forward to watching the ACD Coordinating Council enact the plan and grow the appreciation for the arts in the downtown area.” Hume is now administrator of the Las Cruces International Airport.

“This is incredible news about the city’s efforts regarding the development of an Arts and Cultural District,” Mayor Ken Miyagishima said. “Many thanks to Irene Oliver-Lewis and Sabrina Pratt, our creative partners and some 300 plus community members for this incredible accomplishment!

To be recognized not only nationwide, but internationally is a testament that Las Cruces is head and shoulders above cities working to revitalize their historic centers!”

“The plan was an effort that included many people behind it to champion it and a great vision,” said city Economic Development Department Director Griselda Martinez. “Receiving this international recognition is an honor, being recognized for the hard work put into the plan. Now, we are working in collaboration with our partners to implement the plans and turn the vision captured in words into a reality.”

“The LCACD Coordinating Council “was surprised by the prestigious International Creative Tourism Award,” said council chair David Chavez, who noted that of the 160 applicants for awards, only six were chosen, and Las Cruces was the only U.S. award winner. “The creative economy, quality of life and promoting Las Cruces history, culture and tourism are our goals to build a solid foundation for LCACD,” Chavez said. Without Hume’s direction, the council and the plan would not have been successful.

“This award is a spectacular example of the rewards that come of hard work and careful planning, such as what have gone into our ACD,” said coordinating council member Greg Smith, who is the new executive director of the Doña Ana Arts Council. “I feel very fortunate to be taking up the DAAC executive director position at a point when so many exciting things are coming together for the arts in our community! We are looking at a decade for the arts, and award or no award, our community will benefit for generations to come from the efforts that are being made now.”