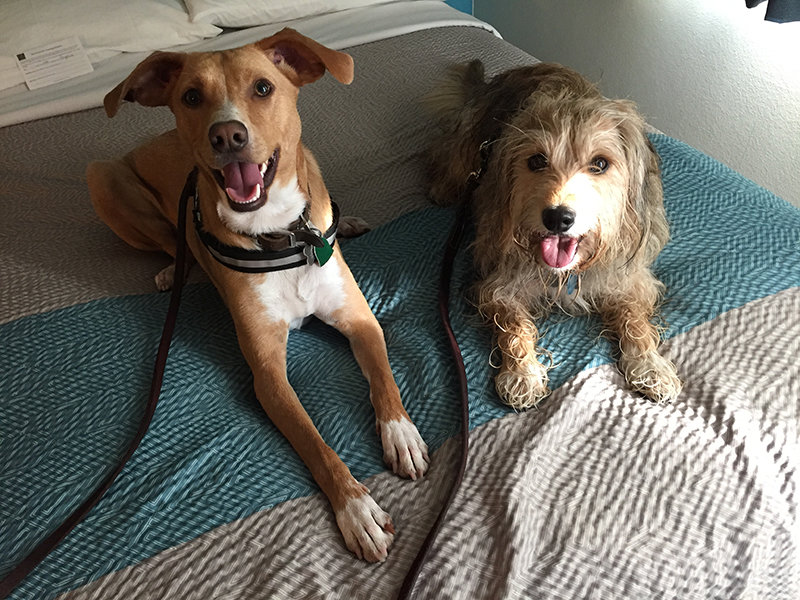 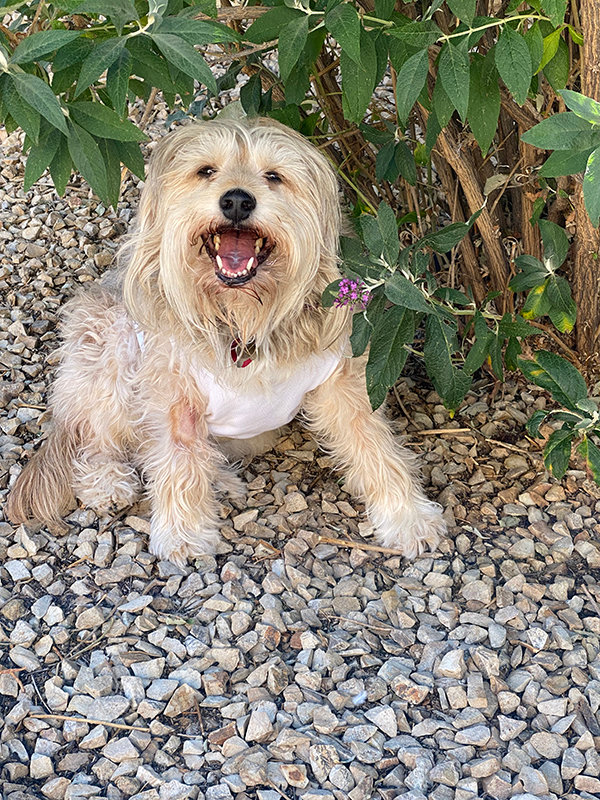 Fergus in his surgical shirt that covers his post-op tummy wound. It was taken, owner Dawn Duncan said, “the first day he felt better and could smile.”
Photos courtesy of Dawn Duncan 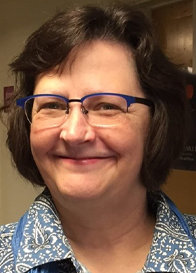 If Las Cruces gets a new after-hours emergency animal hospital, some of the credit will go to Barney and Fergus.

After Barney, a Basenji and redbone hound mix, was attacked by two other dogs and suffered serious injuries in June 2020, owner Dawn Duncan was able to take him to after-hours emergency care in Las Cruces. But, when Fergus, a schnauzer/beagle cross, started bleeding on a Saturday several days after surgery earlier this year, Duncan discovered that around-the-clock emergency animal care was no longer available in the city and had to rush him to an animal hospital in El Paso.

“I was shocked to learn that the second largest city in New Mexico does not have a seven-day-a-week, 24-hour emergency animal hospital,” Duncan said in a letter to the editor.

“My dogs are my family,” she said. “I have a responsibility to care for them.”

Both dogs are now healthy, and Duncan is on a mission to bring full-time emergency veterinary services to Las Cruces and southern New Mexico. She has organized a “civic action group” called Animal Companions of Las Cruces, which already has 65 local members who meet regularly and its own website.

“I will not stop until something changes,” said Duncan, who moved to Las Cruces with her husband, Dennis, and their dogs Barney and Fergus in August 2019.

They came from Moorhead, Minnesota, which is adjacent to Fargo, North Dakota. With a population and median income comparable to Las Cruces, Fargo was able to open its own emergency animal hospital in 2005, Duncan said.

All the veterinarians in Fargo “came together,” she said, put up $50,000 and borrowed another $150,000 to open an emergency hospital. Each vet took one shift a month at the hospital, which was paid off and making a profit within five years, Duncan said.

That same model could be applied in Las Cruces, she said, and that’s why Duncan is trying to organize a consortium of local veterinarians. Animal Companions is also contacting local realtors and the City of Las Cruces to find a suitable space for an animal hospital, she said, and is reaching out to students studying veterinary medicine to encourage them to set up practices in Las Cruces.

“Vets are super-stressed,” Duncan said. “We recognize that. We’re trying to do something that would really help them,” she said, as well as being a benefit to local pets and pet owners.

Plan B, Duncan said, would be to reach out to BluePearl Veterinary Partners based in Tampa, Florida, which has helped set up pet hospitals in other cities.

Duncan is professor emeritus of English, film and global studies who taught for 25 years at Concordia College in Moorhead, Minnesota. She is a master practitioner and college/university trainer for the international nonprofit Narrative 4, which uses storytelling and story exchange to help young people develop empathy, learn to “listen deeply” and better understand themselves and their “power to change, rebuild or revolutionize systems,” according to https://narrative4.com/.