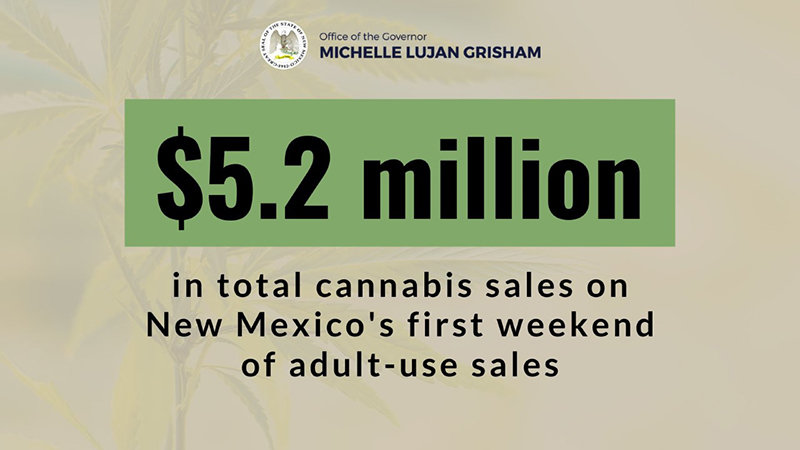 "New Mexico's launch of recreational cannabis has been one of the most successful, if not the most, of any state," said Gov. Michelle Lujan Grisham. "Not to mention that we beat Colorado's numbers for first-day sales. New Mexicans demonstrated the strength of the demand for this exciting new industry, and it is clear that  adult-use cannabis is going to be a contributor to our diverse state economy."

“In every state that launched adult-use sales before New Mexico, some retailers sold out on opening day,” Thomson said. “In New Mexico, that was simply not the case. Customers and patients across the state were all able to get the products or medicine they wanted and needed. Through careful regulatory planning hand-in-hand with industry, New Mexico cannabis producers have done something that’s never been done before. This weekend’s successful launch is something we can all be proud of.”

Other states have also seen statewide seed-to-sale tracking system problems that limited or halted sales altogether. Again, New Mexico did not experience those problems and the statewide system worked without a hitch throughout the busy weekend.

As of the start of sales on Friday, 151 retail licenses had been issued, covering nearly 250 locations.

After a smooth and safe weekend, the CCD continues to advise anyone buying cannabis to consume responsibly. The CCD recommends that new users “start low and go slow,” starting with products with low THC content and slowly increasing consumption once someone has a sense of how their body is responding.

The Cannabis Regulation Act, passed by the Legislature and signed by the governor last year, called for sales of adult-use cannabis to begin no later than April 1. The new industry is projected to generate over $300 million annually in sales, create more than 11,000 jobs and bring in $50 million in state revenue in the first year alone.