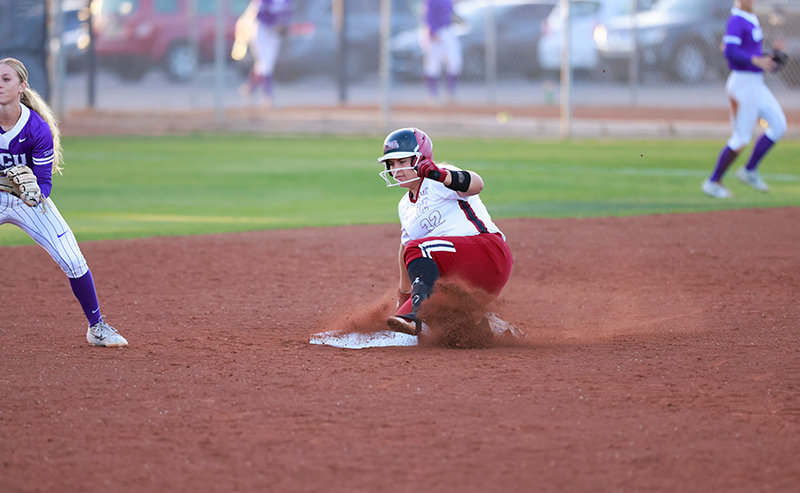 First PitchNM State continues its stretch of home games versus conference opponents as they welcome Seattle U to the NM State Softball Complex for a three-game series starting Friday, April 8, with a doubleheader scheduled for Saturday, April 9. The weekend series will be a rematch of the 2021 WAC Tournament Championship game in which the second-seeded Redhawks edged out the top-seeded Aggies, 7-5. The Aggies are coming off their first series win in WAC play this season, taking two out of three games against Utah Valley. The Crimson & White will take the field Friday with first pitch scheduled for 6 p.m. The Aggies and Redhawks retake the field Saturday for a doubleheader with the first game set to start at 4 p.m. and game two approximately 30 minutes after the completion of game one. Where to WatchThe three-game tilt between the Aggies and Redhawks will be featured on the WAC Digital Network, fans able to tune into WACSports.com/watch and keep up with live stats of all three matches available on our website. Legend in the DugoutKathy Rodolph has had a remarkable career as the head coach of the Aggies. In her 19th year at the helm, Rodolph is the winningest coach in NM State history with a 552-463 record. She's led the team to four WAC Tournament Championships and six WAC Regular Season Championships, including last season when the team went 14-4 in conference play. She is also a five-time WAC Coach of the Year. She has helped the Aggies capture the last eight WAC player of the year awards and back-to-back WAC Freshman of the year awards. Additionally, Rodolph has helped 17 players earn NFCA All-Regional Team honors. Aggie RundownPrior to WAC play, the Aggies' struggles were somewhat reflective of the level of competition they faced as their schedule has featured six games versus Power Five opponents, two teams ranked inside the top-25 and three squads that participated in the NCAA Softball Tournament one season ago. In their series with Utah Valley, the Aggies were led by a seven-hit weekend from Kayla Bowen that included three home runs, a double and six RBIs to pace NM State. Jillian Taylor continued her hot streak as she went 5-for-10 at the plate while pushing her hitting streak to 17 games. The Aggies blasted home runs all over the NM State Softball Complex, recording 12 home runs between Hannah Lindsay (3), Kayla Bowen (3), Ramsay Lopez (2), Riley Carley (2), Gabby Aragon (1) and Jillian Taylor (1). Statistically SpeakingAmidst her hit streak, Jillian Taylor has quickly become one of the WAC's top hitters, her batting average of .429 ranks second in the league. Taylor's current streak also ties her for the longest hit Aggie hit streak since 2013 when Amber Olive also went 17 games with a knock while marking the second-longest hit streak in the NM State program since 2007 when Stephanie Herrera had a 19-game period with a hit. On the offensive side, Ramsay Lopez's performance at the plate has her among the league's best - ranking first in slugging percentage (.800) and home runs per game (0.37), while also placing second in walks drawn (22), home runs (11), and recording the third-best on-base percentage in the conference (.500).  Through 30 games, the Aggies lead the WAC in home runs (41) and slugging percentage (.526), while their 154 RBIs are second-most in the league. As a team, the Aggies also rank third in runs scored (169), on-base percentage (.385) batting average (.317) and fifth in total hits (251). Taylor on a TearAs of late, sophomore utility player Jillian Taylor has been the Aggie with the hottest bat. She is currently riding a 17-game hit streak, the last time she went without a hit being March 6th versus then No. 5 Washington. During her streak, she has six multi-hit games, five doubles and a trio of home runs. In the 20 games this season in which Taylor has registered two at-bats or more, Taylor has only failed to tally a hit in one game. After being in and out of the lineup for the first six games, Taylor has been a staple in the starting lineup since March 5. In 27 games this season, the Spokane, Wash., native has posted a batting average of .429 - a team-best among hitters with at least 25 at-bats. Scouting Seattle UThe Redhawks come into Las Cruces with a 21-14 overall record and a 7-2 conference record, good for third in the WAC standings. Since the start of conference play, it's been feast or famine for Seattle U, its two losses have come in shortened affairs. Last weekend, the Redhawks swept a three-game home series against Dixie State, outscoring the Trailblazers by a combined score of 17-1. Heading into their matchup with NM State, the Redhawks rank fifth in the WAC in team batting average (.280), fifth in runs scored (158) and fourth in hits (260). On the pitching side, Seattle U holds the third-best team ERA (3.34), ranks fourth in strikeouts (173), and fifth in hits allowed (259). Two-time All-WAC outfielder Olivia Viggiano leads the the team with a .328 batting average, ranking fifth in the conference with 38 hits, tied for seventh in the WAC in stolen bases (9). Three-time All-WAC selection Carley Nance brings the power in the Seattle U lineup, leading the WAC in RBIs (48) and home runs (12), while ranking third in the conference in slugging percentage (.765), Preseason All-WAC selection Stefanie Madrigal leads the Redhawk pitching staff, pacing the conference in wins with a 14-4 record, while also posting a league-best 2.01 ERA. In her last outing against Dixie State (4/2), Madrigal pitched a complete game shutout, allowing eight hits while tying her career-high with eight strikeouts. History vs. Seattle UHistorically the Aggies have dominated the Redhawks, winning 22 of the 32 matchups since Seattle U joined the Western Athletic Conference. In recent years, the series has been a much more even matchup, the Aggies sporting an 8-10 record against Seattle since 2017. The last meeting between the two teams came in the 2021 WAC Championship game, the Aggies falling to Seattle U 7-5. Kayla Bowen led the Aggies in hits for the game, recording two doubles on three hits.