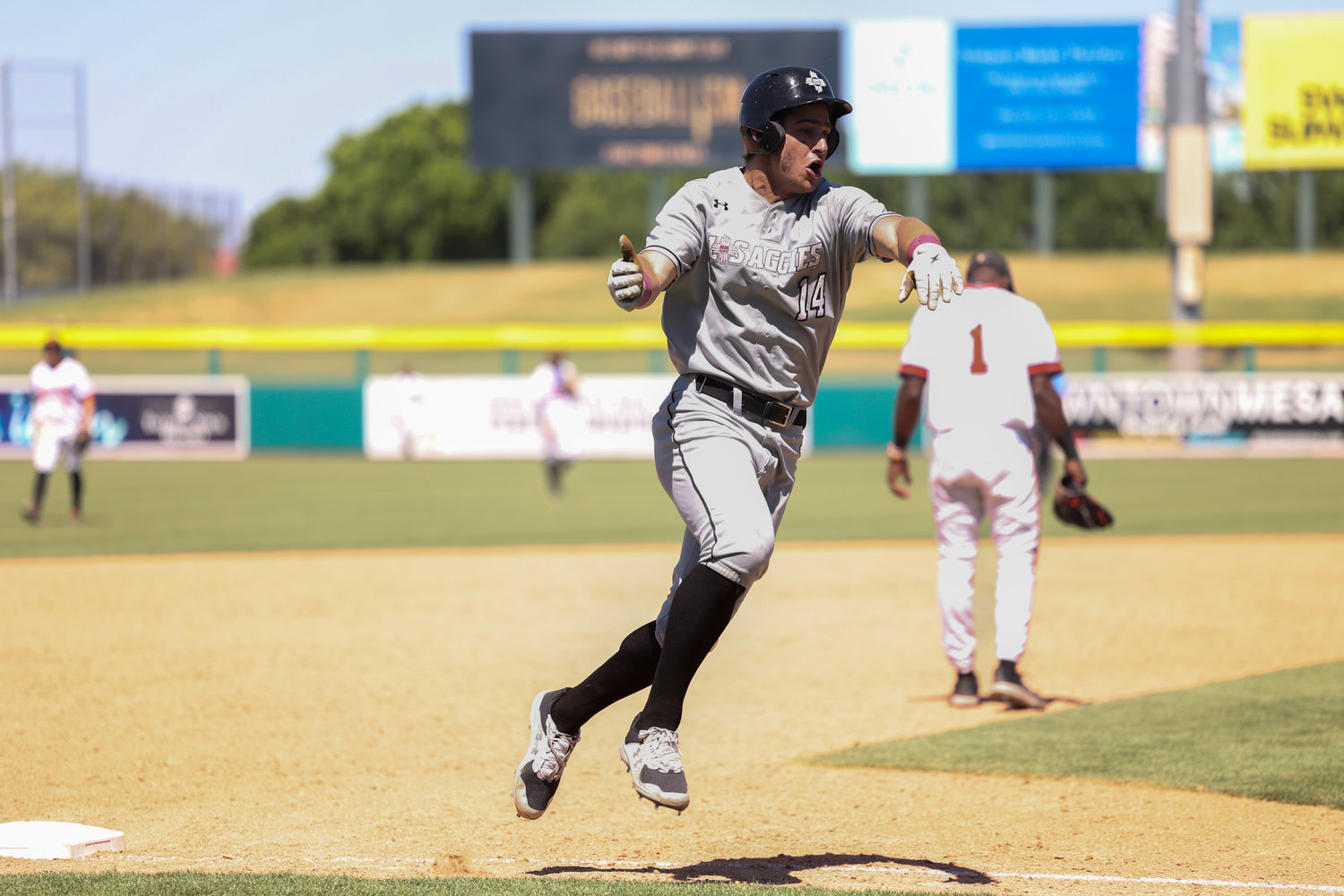 NM State's Tommy Tabak hit a key homer in the Aggies' win over Sam Houston State in the first round of the WAC tourney May 25 in Mesa, Arizona.
Coutesy NMSU Athletics
Posted Thursday, May 26, 2022 6:35 am
From NMSU Athletics

MESA, Ariz. –  Postseason baseball is oftentimes about dominant pitching and timely hitting. The NM State baseball team got just that on Wednesday afternoon as Pablo Cortes and Tommy Tabak played the heroes for NM State in a 3-1 win over the top-seeded Sam Houston Bearkats.

Cortes was lights out from the beginning of the game, allowing just one hit over the first two innings. Throughout the day, Cortes just continued to get better as the day progressed.

Edwin Martinez-Pagani got the Aggies going in the third after Cal Villareal and Gunner Antillon drew back-to-back walks to open the inning. With two away, the Puerto Rico native snuck a ball just inside the right field line and flew for a two-run triple.

Sam Houston got a run back in the fourth inning on a double to left field. Cortes got his first strikeout of the day to end the inning and bring the NM State bats back to the plate. In the fifth inning, the Juarez, Mexico native struck out the side to swing all of the momentum back to NM State's favor.

In the eighth inning, Cortes' day came to a close. As the Aggie faithful gave Cortes a standing ovation on the way back to the dugout, Alex Bustamante entered the ballgame. The NM State closer got the first batter he face to line out to left field and end the eighth inning.

After 13 straight Aggies had been retired, Tabak led off the ninth inning with a solo shot to the deepest part of the ballpark. An energized Aggie dugout exploded onto the field and the bats awoke for two more hits in the inning but Tabak's blast was the lone run of the frame.

Bustamante worked around a pair of singles in the ninth inning and kept Sam Houston off the board. Closing out the 3-1 game, Bustamante picked up his seventh save of the season and continues to climb the NM State single-season saves list.

On-Deck
The Aggies will stay in the winner's bracket to play UTRGV on Thursday at 5 p.m. MT. The game will once again be shown on ESPN+ or can be heard on 91.5 KRUX with Adam Young on the call.