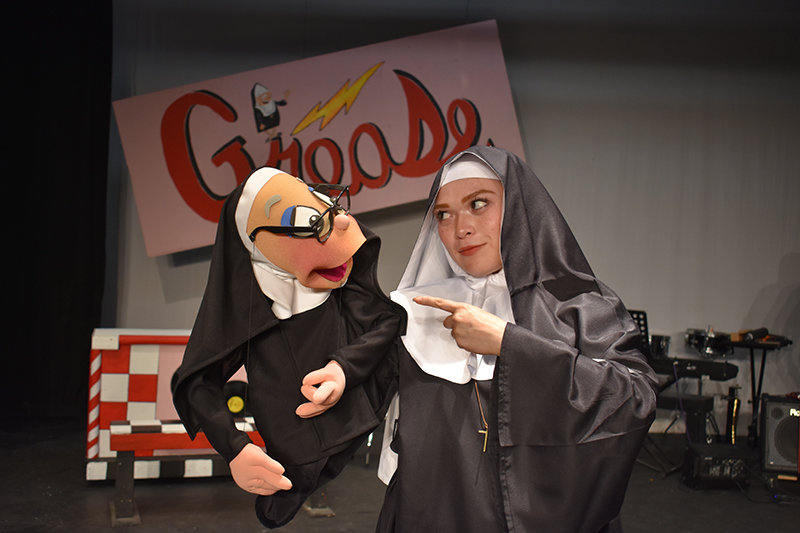 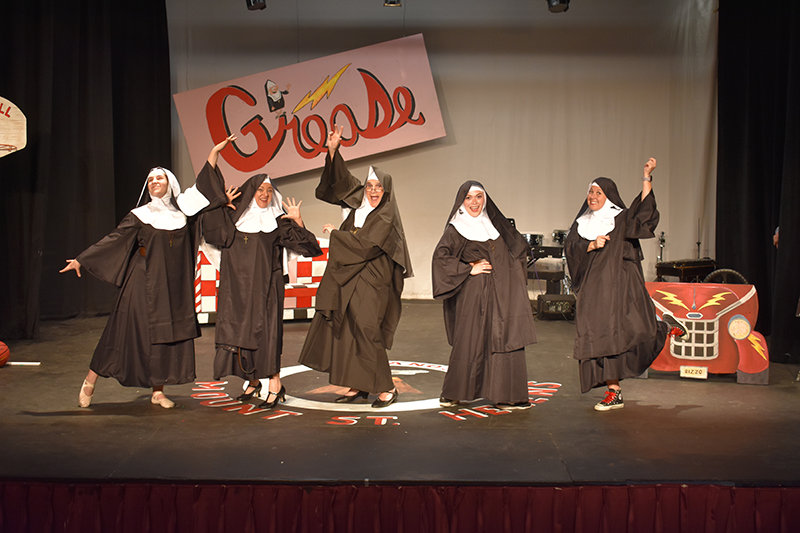 That’s exactly what playwright Dan Goggin intended when the show premiered Off Broadway in 1985. And, it’s why Las Cruces audiences have loved productions of “Nunsense” and its sequels since 1992.

I am delighted to report LCCT’s revival of “Nunsense” continues that grand tradition, and even includes a couple of cast members audiences will recognize from previous productions.

In the show, the devoutly entertaining Little Sisters of Hoboken, who once ran a leper colony on an island south of France, have come together for a fundraiser so they can bury four deceased members of their order who are in cold storage because of a cooking disaster courtesy of Sister Julia, Child of God. (I mention all these details because there really will be a quiz. One of the delights of “Nunsense” is the audience participation before and during the show.)

Mother Superior (Judy Bethmann, playing Mary Regina at LCCT for the second time) is circus folk who loves the spotlight and applause – remember that for the beginning of the show. Sister Robert Anne (Janet Beatty-Payne in her seventh “Nunsense” performance) is the most streetwise of this superfluity (that’s the term for a group of nuns – very much like a gaggle of geese or a murder of crows) of sisters who gave up dreams of a career in musical theatre to join the church. Sister Mary Amnesia (Isabella Candelaria) lost her memory when a crucifix fell on her head, but she remembers how to operate an ill-tempered and hilarious hand puppet. Sister Mary Leo (Jada Bryant) is a novice who wants to be the first ever ballerina nun as she keeps the sisters on their toes. Sister Mary Hubert (Shari DuMond) is second in command and the most grounded of the sisters, which may not be saying a whole lot.

Director Wil Kilroy and this entire cast deserve gold halos. The characters are all wacky; the actors are all outstanding.

More gold halos go to Doug Roby, who continues to create memorable set pieces that add immeasurably to every production he is a part of; accompanist Barry Shaw (who also gets to do a bit of acting) and Brian Theodorson on the drums; stage manager Debbie Kocab; lighting designer Dan Robillard; light board operator Brad Yerxa, sound/microphone operator Audra Yerxa and spotlight operators Marley Yerxa and Waylon Yerxa.

Bethmann gets an extra halo as musical director and Beatty-Payne as choreographer, costume designer and property manager. Candelaria and DuMond get more halos because they traveled to Las Cruces from El Paso for every rehearsal and performance. Bryant gets a platinum halo as the youngest cast member. She is a senior at Centennial High School who is simply brilliant in this show.

These women are all outstanding, as they shine individually and as an ensemble – acting, singing, dancing and bringing back to life the wacky nuns we love so much.

Can I get an amen!

Tickets are $17 for adults, $14 for senior citizens and military, $10 for children ages 12 and under, $5 for student rush tickets and 20 percent off for groups of 10 or more. Season tickets are available through Aug. 21. Buy tickets online at www.lcctnm.org or at the theatre before each performance.